This time I used actual wooden clothes pegs to make the figure. I used one with the tips cut off to give a flat contact with the base (I reinforced the joint by pinning both feet with sections of cocktail sticks), and I used the prongs of another to create the arms. The club is made from a paintbrush handle, whittled to look rough, and with the point of a cocktail stick driven through a hole in the end to look like a big nail or spike. The pig is a peg doll, the same size and shape as the orcs, but with the addition of little legs; sections of cocktail stick glued into drilled holes. 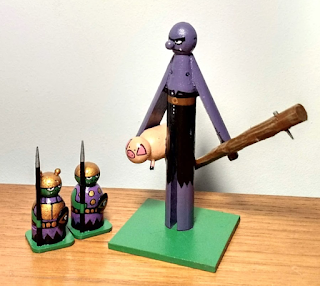 I've been making these figures for use in loads of different fantasy wargames. I don't think it's quite correct to call them 28mm 'scale' exactly, as their proportions are quite exaggerated, but they are mounted on 20mm bases, and the orcs stand 30mm high, which is just about right for 28mm games. 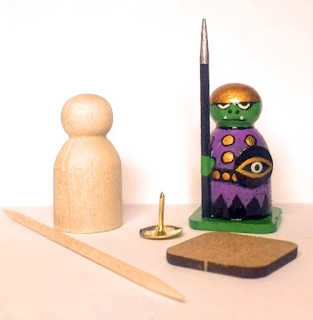 The main body is a wooden peg doll from eBay. There are lots of people selling them. These ones are 30mm tall and 15mm in diameter, which allows them to sit on a 20mm base comfortably and they'd look fine on 25mm round too. I removed about 5mm with a saw when making the dwarfs, using a mini mitre box.  I've been using brass drawing pins for the shields. These ones are about 9mm in diameter. That works fine for the dwarfs, but I might look out for larger ones for the orcs. I predrill a hole and blob a little superglue in the hole before fixing it in.

Cocktail sticks work fine for the spears and banner poles. These banners are made from scraps of 2mm mdf. I filed a flattened edge onto the poles where the banner was to attach, and also cut out a little curve from each banner where it would meet the round helmet. This seems to give enough contact to create a secure bond.

The little round horns on the orc leader's helmet and the dwarfs' noses are glass headed pins, the shafts cut down a bit, and glued into drilled holes like the shields. The heads on these are 3mm in diameter.

The spiky horns on the dwarf leader's helmet are cocktail stick ends, again fixed and glued into drilled holes- a larger drill-bit is required here.

The dwarfs' axes are Lego ones. I bought 20 from eBay for about £2.50. I cut down the hafts, but if I make dwarfs with two handed axes later, I will use them as they come.

The beards are tiny little scraps of green scouring pads carefully superglued on, and then flooded with thin superglue to stiffen them. They take take paint fine once spray primed.

Naturally the painting style for a project like this has to be stylised and gestural- a 'toy-soldier' look is best. hands and arms are just painted onto the wood, and legs are ignored altogether. I started with a base of black spray primer, and leave a black line between areas of detail to suggest form and depth. The dwarf beards are given a simple drybrush to bring out the texture, and then that colour is continued as stippled paint onto where the sideburns and hair extend on the dwarfs' heads. Once complete, the whole model is sprayed with gloss yacht varnish.

Once the basic idea is hit upon, lots of developments come to mind. I already have plans for larger models, vehicles, buildings, mounted figures and different arms and armour, all achieved in a similar way. I'm convinced that just about anything in the more generic army lists for games like Kings of War, OnePageRules' Age of Fantasy, Dragon Rampant, Thud & Blunder, Saga Age of Magic, classic Warhammer etc. etc. could be created. I feel that these figures have the advantage of being not only inexpensive, but also easy to 'read' on the tabletop, and, because the transformation from the original materials is so complete, and the work to make them into believable miniature warriors is entirely your own, a full army like this could be a great source of pride- for younger and older gamers alike.

Daleks and a Tank

The game I currently have in mind when I build and paint is OnePageRules' Grimdark Future. It's a streamlined game, free to download, that's inspired by Warhammer 40,000. I've very nearly finished my little starter army of 'Havoc Brothers', but in the meantime, here's my 'Robot Legions' force. Most people will represent Robot Legions in the game with GW's Necron range, but I think Daleks are a good fit for the army, and I happened to have a big bag of them! 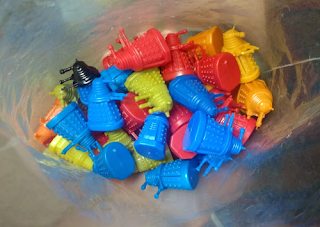 These are cheap plastic toy Daleks that came free on the cover of children's Doctor Who magazines a while back. I bought mine in a big bag of about 50 at a car boot sale for 50p!

I painted them with cheap black spray primer and metallic Sharpie pens- very quick and simple. 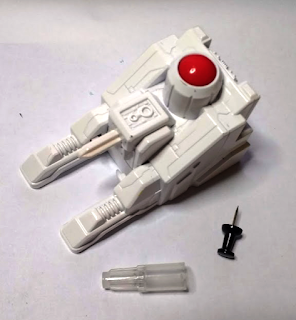 The 'Doom Tank' presumably has a clear equivalent in the Necron range, but I don't know what it is. However, The stats and rules seemed to fit the one I've made. It was a quick conversion from a mysterious part-of-a-toy I've had in the bits box for a while. I added a pen lid and a map pin as gun barrels, and a bit of plastic underneath to give the impression of hovering. I've ordered some flat backed round bead stickers in silver. These will be added to the side panelling to echo the round things on the Dalek's armour. 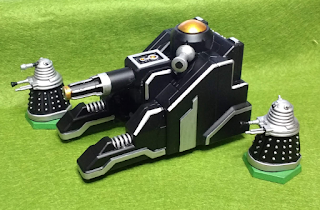 Here's the force, ready to play! 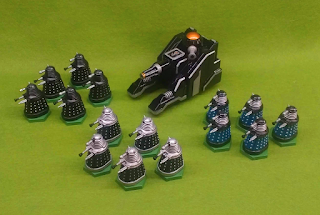 This method will give you a reasonably robust little tank/APC that's about the size of a Space Marine  Rhino from Warhammer 40k. 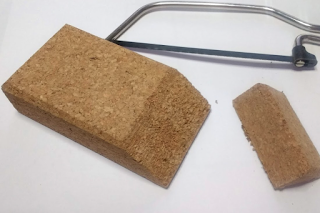 This is a cork sanding block from a hardware/DIY shop. I sawed one end to a wedge shape. 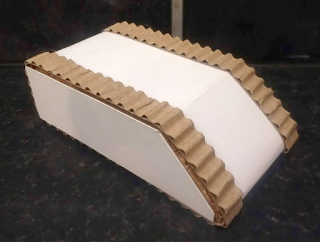 I wrapped the body in cereal packet card, leaving the sides bare. Then I put strips of corrugated card all around the edges to represent tank tracks. If you lightly wipe one side of a piece of reinforced card board with a slightly damp cloth and leave it for a few minutes, you can peel away the top layer and reveal the corrugated layer. Then I cut pieces of card to cover the sides. I used a hot glue gun for all the sticking on this project, but PVA glue would work fine for most parts (except the gun below- that will require superglue if you don't have a glue gun)- it would just take longer to dry. 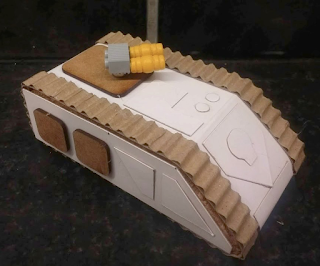 I added panel and door detailing with card pieces and old MDF bases (these could easily be substituted with more card pieces). The gun turret is made from two wooden beads and a lego piece. It is mounted on a magnet, which meets another magnet stuck to the hull, allowing the gun to swivel, but this isn't really necessary. 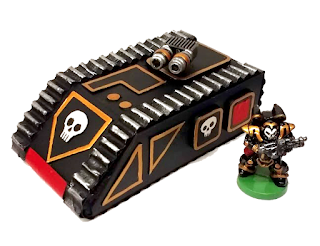 Afterwards, the whole thing was painted black, and then details were added to match my army colour scheme. The tank tracks were picked out by dragging silver paint from a nearly dry brush over the ridges, taking care not to stray onto the other parts. The gold details could have been added with a gold Sharpie pen, but I'm never sure how those will react to any varnish you want to put over the top.

The miniature next to the tanks is an old Grenadier Space Ranger, now available from EM4- more about him later.
Posted by Joe McLaren at 19:23 4 comments:

Kids love tabletop gaming, but it's expensive, complicated and intimidating.

This is going to be a blog that aims to share ideas about how to get kids involved in wargaming in a way that suits their age and abilities, exercises their imaginations, teaches them new skills, doesn't take ages, and uses cheap and cheerful materials. There are lots of places on the internet that will tell you how to craft wargaming stuff, but even the best of those are aimed at adults, and the materials and processes involved can often make the project unsuitable for children of primary school age. I have two children aged 5 and 8. and I'm going to try and pitch my projects at this sort of age group- using the old Blue Peter 'makes' as a blueprint.  I'll also be talking about rules, but to a lesser extent. 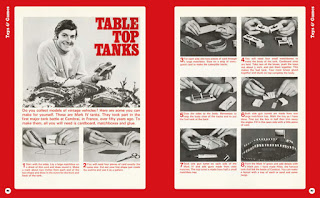 Joe McLaren
Undisciplined wargamer, roleplayer and hobbyist. Produces quick paintjobs slowly. I love Kings of War, and a host of other games (both historical and fantasy, occasionally SF and pulp)- particularly simple, cheerful, inexpensive ones.